Brianna Robbins is a senior at Haverford College in Philadelphia, Pennsylvania. Her illustrious athletic career and her stellar academic performance led to an internship after her junior year of college which has provided her with a job offer. Her future secure for the time being, an advantage not extended to many in the current job market, she took a few minutes to reflect on how she got to this position.

Growing up in Orchard Park, a suburb outside of Buffalo, NY, Brianna's involvement in sports began at an early age. 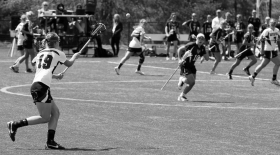 Thus, upon her arrival to Haverford, a transition into the athletic field was natural. She joined both the women's varsity lacrosse team and the women's varsity basketball team. "I really enjoyed being on a team. I'm naturally very competitive. It was great coming into college with a network of friends too, and having that group for all four years. It was a great experience. My basketball team won the Centennial Conference for the first time ever and that was a night I'll never forget. We got to cut down the net and everything." Being able to work on a team as a collaborative effort served her well in her later endeavors.

Brianna's major in college was economics with a minor in philosophy. When asked about her unique choice, she explained, "I was really encouraged to embrace the liberal arts education here at Haverford. I found it enjoyable to go from a logical, rational economics class to a philosophy class where you think more outside the box and more abstractly." At Haverford, there is a requirement for seniors to write a compulsory thesis. Brianna's idea for her economics thesis – whether the higher expense ratio of an actively managed ETF (exchange traded fund, which is managed by a portfolio manager) is justified by the higher returns as compared to a traditional passive ETF (a traditional investment consisting of buying an index rather than having an advisor manage it for you) – relates to the internship she was lucky enough to have last summer.

This summer, Briana received a ten week internship from one of the best asset management firms on Wall Street. Brianna worked on the sales desk, and assisted the associates who sell the mutual funds and ETFs (exchange traded funds) to financial advisors, who would like their client's money managed by this firm. The internship program itself was very well developed. There were 30 other interns in office. The campus recruiting team put together a lot of talks, breakfasts, and lunches with upper management that let us see what they were doing and how they got there showed different career paths so the interns had the chance to gain knowledge of the industry and people in it.

The portfolio challenge ended the summer. The interns formed teams and had to create a fund or portfolio with a theme, choosing stocks and making a presentation at the end of the summer competing against the other interns. Brianna's team made it to the final round of the presentation and presented to the CFO of the company. Their fund was called Yshares and was a fund for the young investor. "Our idea was to get young adults involved in the market and teach them what they were holding in their portfolio and why. It is crucial for young people to invest their money and to also be involved with the investment decisions that are being made with it."

Her internship led to a job offer in the same department once she graduates. 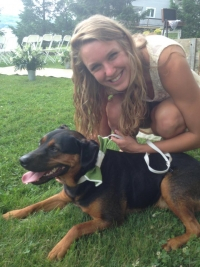 Her future is bright and her many years of hard work have paid off. Such things as her athletic career have provided her with the personal growth needed to be a successful individual and her academic work has given her the understanding and qualifications that landed her an impressive internship and subsequent job. Hard work and an entrepreneurial spirit are hallmarks of a successful Millennial in the workforce.

Little Things
We have engaged the services of Lori Ermi twice and were extremely pleased with her work. She was thorough and very effective from the planning and interviewing to the execution of the day's program. She helped our staff relax and engage in a fun and interactive environment that really helped our objective for the day. She is one of the finest and most effective facilitators of retreats and seminars I know."
Rajendra Pillai, Executive Pastor, Damascus Road Community Church