Brooke Bonkoski is a civil engineer working in water remediation living out on the West Coast in Oregon. Her interest was sparked in college, where she began as a mechanical engineer wanting to design skiis.

"You have some chemical that has spilled which poses a risk to humans or the environment (animals, fish, aquatic life). Our goal is to reduce that risk so that it is not posing a threat to the environment or humans. Reducing the risk can be done in lots of ways. You can excavate or remove the material which is called dredging. You can stabilize it by making it bound in place. Or you can isolate it by covering it over with something that is impenetrable so you can no longer come into contact with it. Sometimes you can even treat the material. For example, burning the soil at a high temperature rids it of chemicals but then you have burnt soil to deal with."

When asked what her favorite part of her job was, Brooke said it was the fact that it is different every single day, which is something very important to her. Though there is a general expectation of how the day will go, it can change as things come up. There are new challenges with each site even though there might be an established way of doing things, so there is something new with each one. Working in water remediation is the same general concept but each site is unique and brings its own challenges that must be faced and adapted to.

Engineering is a field in which women are traditionally underrepresented. Brooke mentioned that early on this factor was part of what drew her interest in the field. As a mother of two young children, she shared some of her insights on women in the workforce. "People want to change it, the fact that women are underrepresented, but a lot of it is unconscious," she said. 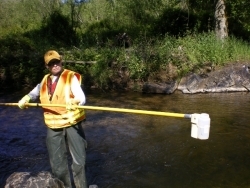 "Supporting women when they leave to have kids and ensuring they can reenter the workforce would be a big help." She chose to return after her six months of maternity leave with her first child, and she credited a supportive husband and progressive work environment with her ability to do so. Some women really enjoy their maternity leave and realize they want to stay at home but some realize just how important their career is. Either choice is perfectly acceptable, Brooke explained. "It has to be what you recognize is best for you."

Working in a field that is usually male dominated, Brooke's story and her passion for her work are inspiring. Her knowledge of the work she does is impressive and admirable.