Jesse Showalter is a recent graduate from Grove City College in Pennsylvania. In a time where Millennials are facing an increasingly difficult job market and coming to grips with the realization that often your dream job doesn't simply just fall into your lap, Jesse is among the lucky few who has landed an impressive position. Beginning July 28th, he entered the workforce as an Associate Professional Staff member at the Johns Hopkins University Applied Physics Laboratory.

Jesse has a number of unique experiences under his belt that have provided him with a global perspective often coveted by the globetrotting Millennial generation. 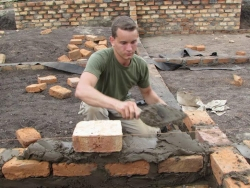 His parents were missionaries in the country of Burkina Faso in Africa, where he spent a majority of his childhood, returning periodically until beginning high school in the States. In turn, he had the opportunity in college to make a number of travels.

He took a modern civilization course in France which reminded him of his love of travel but also prompted a new realization: traveling as a tourist is very different from the experience of living in a country and learning their culture and customs by becoming part of them. Visiting places as a tourist often forces the visitor to rush around to see the sites and limits the visitor by not allowing him to see how everyday life is typically lived. It was this experience that suggested traveling during the summer after he graduated prior to his job beginning.

Through Project Okello, a group on GCC's campus that works with African charities and raises awareness for humanitarian issues, Jesse became aware of an opportunity in Uganda for an internship with the Kamwenge Secondary and Vocational School. During his trip to Kamwenge, he experienced culture shock; a familiar concept due to his international childhood, but one that he had not experienced for a number of years. Culture shock reaches a deep and fundamental level. Jesse explained further by saying, "There was a sense of persistent uneasiness and loneliness. It never really leaves when you are in a culture you don't really understand with people you don't really understand." In order to combat the loneliness, Jesse cultivated perseverance and diligence. Acting as a jack of all trades, he assisted in the school wherever needed.

When Jesse returned to America, he began his job at APL shortly thereafter. His job entails model analysis and software development. A lot of work at APL is self-directed, he explained. Rather than being tasked with something, you find something you are interested in and see if you can get funding for it; or else you find someone else who has a project you are interested in and ask if they need help.

Jesse's math major prepared him well for this job. One of his first projects at APL required him to handle projected areas of rectangular prims, which are calculated by flattening it into the plane and measuring the shape. The difficulty of Grove City classes provided him with a level of perseverance developed from "beating your head against a problem for eight hours and getting nowhere." The social interactions with friends also taught him to look at work not as a place to go for eight hours and then leave but rather as a community to invest in. As a result, the workplace becomes much more enjoyable. 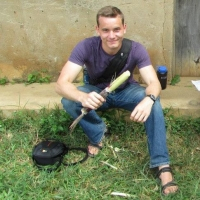 His international experiences and globetrotting childhood have given Jesse a distinctive past that has provided him with the skills needed to become a productive member of society.  "Doing good and useful work is what is needed to make a satisfactory job," Jesse said. "Even if the work isn't strictly satisfying now, Uganda has given the perseverance to push through until it does." Many Millennials struggle with precisely what Jesse delineates. His words are a lesson that many might learn from, and his story is one that captivates.