Spotlight on Talent: Karen Miller Goes on Her Dream Adventure

Karen Miller is a woman with experiences to make anyone green with envy. Her travels have taken her to China, Tibet, Prague, Ghana, Afghanistan, and further. Lessons learned from such expeditions speak to Millennials, many of whom have been bitten by the same travel bug. Karen's first experience abroad was during college when she studied in the Czech Republic. It was here in Prague where her wanderlust was kindled. 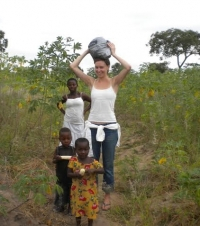 After graduating college, Karen knew that she wanted to go abroad again. The question then became where and for what purpose? Lacking a clear direction with her arts degree, she found a program called World Teach which allowed her to go abroad to China to teach English for a year. While in China she had the chance to travel to Tibet which was one of her favorite traveling experiences because it was so "magical." People are very spiritual and religious and devoutly Buddhist in Tibet. There are lots of pilgrims and temples. People go around the city and receive alms while praying all day; they prostrate themselves on the ground while circling Lhasa. Karen explained that her Tibetan guide really opened up about the oppression of Tibet by China, and having him as a tour guide through this mystical city and surrounding villages was unmatched by any other travel experience. Rather than being in Shanghai or a major city in China, Karen was in a remote province, Hunan, which illuminated her career path: she now knew that she wanted to pursue a career in international development.

When she returned home she knew that she needed more experience and more schooling to achieve her goal. She found an organization in Ghana and she went. Her explanation of her choice of Ghana is simple: "Ghana was totally random," she explained. "I would have gone anywhere. You have to be willing to take the plunge. That's how you find interesting things."

Of course, she went on to clarify that Africa had an appeal to her because it was such a huge continent and had so many problems. Her decision not to return to China was based largely on the fact that a good deal of China is actually very developed and even over developed, though there are areas that need a good deal of aid. "China is actually giving aid to other countries," Karen explained, "and if you're giving aid to other countries, you're at a different level of development."

In Ghana, she learned about microfinance. Microfinance entails giving small loans to small businesses or farmers or entrepreneurs. It is basically seed capital so people can start growing their business or start a business. In some places, these small loans have a 99% payback rate and have been shown to be very successful. 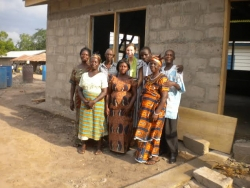 When Karen returned home, she enrolled in Master's program. After she graduated, she worked in DC for Development Alternatives Incorporated. It was through her job at the domestic home office that she received the opportunity to go to Afghanistan for what turned into a two year stint working on development. She explained that she simply jumped at the chance to go even though many people probably would have hesitated due to the dangerous nature of and the stigma attached to Afghanistan. She elucidated her decision by saying, "You kind of have to be willing to go anywhere to get the good opportunities. It's hard to land exactly what you want at first. If you're open to new experiences, things really find you."

In a world where Millennials are constantly discouraged at not receiving their dream jobs immediately after graduation, Karen's wise closing words are more pertinent than ever. Her travels and experiences are a testament to their efficacy.