A Spotlight on Talent: Millennial Leah Williams is Living the Dream at Google

Leah Williams is an ideal picture of an up and coming Millennial. She lives in California and works at Google, the quintessential Millennial company, as a sourcer, recruiting new employees for Google and sometimes reaching out to people who may not even have applied. Google embraces the young Millennials.

The perks of working at a company such as Google certainly help to stay motivated, focused, and engaged, Leah says, but what makes her job amazing, even more than the perks, is the opportunity to make an impact in the world. Working for a global company such as Google provides so much potential for impact because of its far reaching nature.

Leah was a literature major in college at a liberal arts school. In an age where many have come to doubt the value of a liberal arts education, Leah provides a defense for it. The communication, writing, and persuasive skills she developed while earning her lit degree have all come in handy in her job as a recruiter but even further than that, the critical thinking skills she honed are highly useful in her career. In jobs often you need to pick up other skills quickly, and having the breadth and adaptability to implement critical thinking in other areas is a valuable asset.

When asked for the most valuable piece of advice she could give based on her experiences so far, Leah says that if you are just fulfilling the job description you are not really doing your job. To truly do your job well and to truly be successful, you must color outside the lines. This is an area where Millennials can make an impact—by transcending the limits of their jobs.

Leah demonstrated this herself by training and working in a field outside of what she studied. Her work in the tech industry, she says, is no way incongruent with her English major. From a young age she was fascinated by technology but math was not her strong suit, so majors such as engineering were out. But there is no reason to say "I'm just a lit person, I can't possibly get a tech job, I can only look at teaching or writing jobs because of what I studied." That limits your potential! 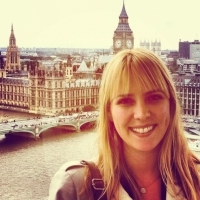 Prior to working at Google, Leah worked as a recruiter at a different company. Her family is from the DC metro area, but after going to school in California she chose to move all the way across the country, creating a new life for herself. When asked about Millennial expectations that she encountered during her job search and work experience, she says that while she has definitely come across stories about entitled Millennials and their lackluster work performance, it is a mixed bag in the technological industry. The tech industry tends to embrace Millennials as a whole. Indeed, many tech companies are founded by Millennials.

Repeatedly, throughout our conversation, Leah continued to exhort young people to follow their passions, not to simply do what is expected of you or what you think you "should" do. Follow what you are interested in and you never know where your path will take you. Many people think if you're going to get into the tech industry you have to be a software engineer. Leah proves that stereotype wrong. The most important motivating factor in her job, she says, is feeling that she is making a contribution to a worthy cause, to her company, to her team. Millennials are frequently reported by bosses as being dissatisfied with their jobs, often because they feel that they aren't making enough of a difference or contributing worthily enough. There are ways to add value to the world beyond literal ways such as serving gruel to starving orphans, she says, and by following your passions which can lead you in so many ways, everyone can find a way to make a difference in the world. And isn't that every Millennial's dream?